Good Contents Are Everywhere, But Here, We Deliver The Best of The Best.Please Hold on!

There’s a key difference between knowledge and experience and it’s best described like this:

The image is from cartoonist Hugh MacLeod, who came up with such a brilliant way to express a concept that’s often not that easy to grasp. The image makes a clear point—that knowledge alone is not useful unless we can make connections between what we know. Whether you use the terms “knowledge” and “experience” to explain the difference or not, the concept itself is sound. Lots of great writers, artists and scientists have talked about the importance of collecting ideas and bits of knowledge from the world around us, and making connections between those dots to fuel creative thinking and new ideas. This is a really fun, inspiring topic to read about, so I collected some quotes and advice from my favorite creative thinkers about the importance of making connections in your brain. I’ve added emphasis to the important parts, but if you have time I’d recommend reading the whole post and even digging into the sources I’ve linked to. To start with though, I want to look at some research that shows intelligence is closely linked with the physical connections in our brains. .

INTELLIGENCE AND CONNECTIONS: WHY YOUR BRAIN NEEDS TO COMMUNICATE WELL WITH ITSELF

. Research from the California Institute of Technology showed that intelligence is something found all across the brain, rather than in one specific region:

The researchers found that, rather than residing in a single structure, general intelligence is determined by a network of regions across both sides of the brain.

One of the researchers explained that the study showed the brain working as a distributed system:

“Several brain regions, and the connections between them, were what was most important to general intelligence,” explains Gläscher.

The study also supported an existing theory about intelligence that says general intelligence is based on the brain’s ability to pull together and integrate various kinds of processing, such as working memory. At Washington University, a research study found that connectivity with a particular area of the prefrontal cortex has a correlation with a person’s general intelligence. This study showed that intelligence relied partly on high functioning brain areas, and partly on their ability to communicate with other areas in the brain. Aside from physical connectivity in the brain, being able to make connections between ideas and knowledge we hold in our memories can help us to think more creatively and produce higher quality work. .

CONNECTIONS FUEL CREATIVITY: NOTHING IS ORIGINAL

. Steve Jobs is an obvious person to reference whenever you’re talking about creativity or innovation, so I wasn’t surprised to find that he has spoken about making connections before. This great quote is from a Wired interview in 1996:

Creativity is just connecting things. When you ask creative people how they did something, they feel a little guilty because they didn’t really do it, they just saw something.

Jobs went on to explain that experience (as we saw in the image at the top of this post) is the secret to being able to make connections so readily:

Maria Popova is arguably one of the best examples (and proponents) of what she calls “combinatorial creativity.” That is, connecting things to create new ideas:

… in order for us to truly create and contribute to the world, we have to be able to connect countless dots, to cross-pollinate ideas from a wealth of disciplines, to combine and recombine these pieces and build new castles.

She’s given a talk on this at a Creative Mornings event before, and made some great points. Being able to read about a wide range of topics is often one of of the most important elements. I really liked how she pointed out the way our egos affect our willingness to build on what others have done before:

… something we all understand on a deep intuitive level, but our creative egos sort of don’t really want to accept: And that is the idea that creativity is combinatorial, that nothing is entirely original, that everything builds on what came before…

My favorite part of this talk is Popova’s Lego analogy, where she likens the dots of knowledge we have to Lego building blocks:

The more of these building blocks we have, and the more diverse their shapes and colors, the more interesting our castles will become.

Author Austin Kleon is someone who immediately comes to mind whenever the topic of connections and remixing art comes up. Kleon is the author of Steal Like An Artist, a book about using the work of others to inspire and inform your own. It starts off like this:

Every artist gets asked the question, “Where do you get your ideas?” The honest artist answers, “I steal them.”

Kleon is inspiring because he’s so upfront about how the work of other people has become part of his own work. He’s also keen on the phrase I quoted from Maria Popova above, that “nothing is original”: Every new idea is just a mashup or a remix of one or more previous ideas. If you’re looking for advice on creating more connections between the knowledge you have (and collecting even more knowledge), Kleon’s book is a great place to start. He offers suggests like:

HOW SCIENTIFIC THINKING IS ALL ABOUT MAKING CONNECTIONS

. When it comes to the field of science, making connections between those dots of knowledge seems to be just as important. In The Art of Scientific Investigation, Cambridge University professor W. I. B. Beveridge wrote that successful scientists “have often been people with wide interests,” which led to their originality:

Originality often consists in linking up ideas whose connection was not previously suspected.

He also suggested that scientists should expand their reading outside of their own field, in order to add to their knowledge (so they would have more dots when it came time to connect them, later):

Most scientists consider that it is a more serious handicap to investigate a problem in ignorance of what is already known about it.

Nature no more obeys the territorial divisions of scientific academic disciplines than do continents appear from space to be colored to reflect the national divisions of their human inhabitants. For me, the great scientific satoris, epiphanies, eurekas, and aha! moments are characterized by their ability to connect.

START MAKING CONNECTIONS AND GETTING CREATIVE

. I’ll leave you with some suggestions for improving your own ability to make connections. .

1. ADD TO YOUR KNOWLEDGE–T.E POWER OF BRAND NEW EXPERIENCES

. After all, the more knowledge you have, the more connections you can make. Start by reading more, reading more widely, and exploring new opportunities for gathering knowledge (for instance, try some new experiences—travel, go to meetups or take up a new hobby). As researcher Dr.Duezel explained when it comes to experiencing new things:

“Only completely new things cause strong activity in the midbrain area.”

So trying something new and forcing a gentle brain overload can make a dramatic improvement for your brain activity. .

2. KEEP TRACK OF EVERYTHING – ESPECIALLY IN THE SHOWER

. As Austin Kleon suggests, take a notebook (or your phone) with you everywhere and take notes. Don’t expect your brain to remember everything–give it a hand by noting down important concepts or ideas you come across. As you do this, you may remember previous notes that relate (hey, you’re making connections already!)–make a note of those as well. You can do this even when you’re in the shower with something like Acqua Notes. The shower is especially a place that has proven to make us more creative. 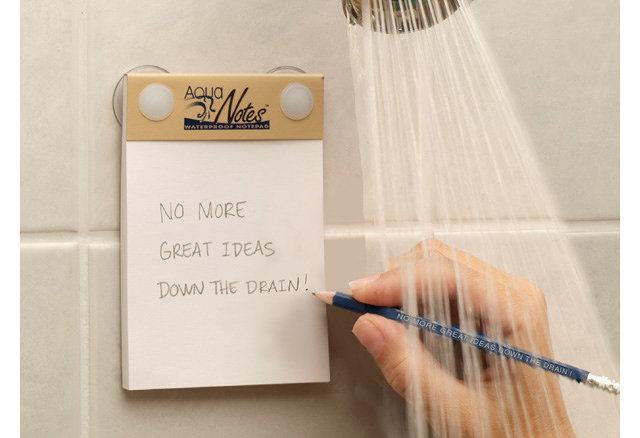 . Going over your notes often can help you to more easily recall them when you need to. Read through what you’ve made notes of before, and you might find that in the time that’s passed, you’ve added more knowledge to your repertoire that you can now connect to your old notes! In fact, this used to be one of Benjamin Franklin’s best kept secrets. Every morning and every evening he would review his day answering 1 simple question: “What good have I done today?” Here is his original daily routine from way back: 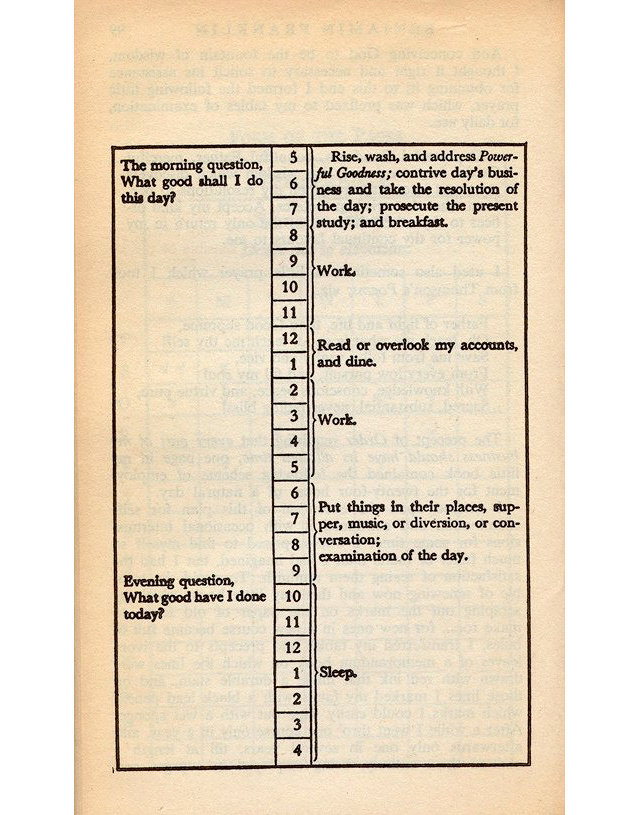 No doubt you have some great ideas of your own–let us know in the comments what works for you. ——— This post was taken from the article  ”THE SECRET TO CREATIVITY, INTELLIGENCE, AND SCIENTIFIC THINKING”, Fastcompany

No comments so far.